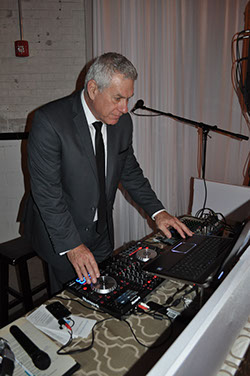 Scott is also an experienced and well respected public address announcer and radio comentator.  His strong voice has been heard during games at Three Rivers High School, Washington High School, and during the South Bend Sectional Basketball Tournament.  He was also the voice of the Kalamazoo Kangaroos indoor soccer team from 1983 - 1985.  Currently, he can be heard on WSBT Radio on Friday nights in fall as the commentator for the High School Football Game of the Week.

Though most of Scott's professional career has been focused on coaching, mentoring and teaching high school students and athletes, his passion has always been music.  Whenever there's a party, he has always brought the music.  He loves hosting, entertaining, and telling a bad joke or two.

When you hire Bov Knows Music, you can trust that you'll get the most professional event DJ in South Bend.  His music collection and knowledge is extensive, and he knows how to fill the dance floor.  You can trust that when you sit down prior to your event and review the game plan, he'll listen to you and only play what you want played.  He has a great voice and can be a Master of Ceremonies if you'd like, but unlike most event DJ's, he knows the event isn't about the guy with the mic.

It’s really not about us, it’s about you - which is what makes us unique.  We’re not the star of your show, you are - we just help make it more fun.